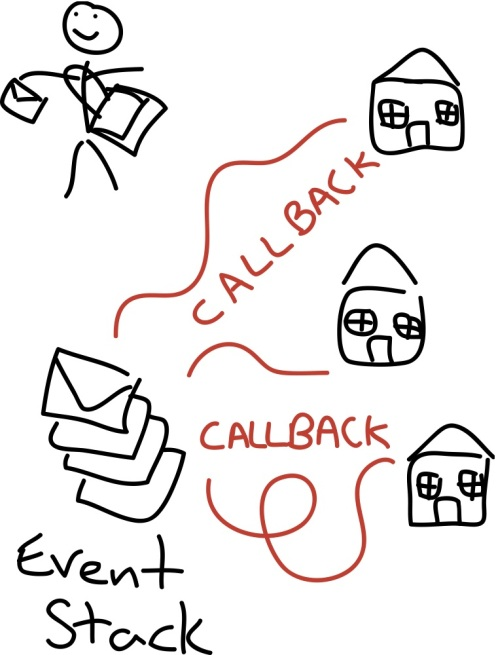 Callback functions are not a new type of function that you have to learn - they are just functions.

A callback function, or simply callback, is a function being passed to another function as an argument!

Let's use the callback function passed to Javascript's forEach method to use on arrays.

In the above, the anonymous inline function being passed to forEach as its one and only argument - is a callback function.

Of course, when a function takes a callback as input, it is likely doing so with the intention of invoking that callback at some point in time.

VOCAB: In computer science, a function that accepts a function as input or returns a function is also known as a higher order function.

Now let's look at a more comprehensive example of how we can use callbacks by trying out this code:

When the add and subtract functions are passed as arguments to the compute function - they are ___________ functions.

Also, note that we are passing named functions (add & sum) instead of using an anonymous inline function like with the forEach earlier.

In addition to using callbacks functions with forEach, you also used them when you added event listeners in your Tic-Tac-Toe app like so:

Be careful not to invoke the callback when passing it as an argument - in other words, do not put parens after it! Otherwise, you'll be passing the result returned by that function instead of the function itself.

3. When are Callbacks Used?

Again, a callback function is a function being passed to another function to be called at a later point in time.

Here are three use cases for callback functions:

One of the most popular use cases for callback functions is to provide them to iterator methods on arrays.

As we've seen, calling the forEach method is a great way to iterate over all of the elements in an array.

JavaScript has designed the forEach method to:

?: How many times would the anonymous callback function below be called - I'll take a number of fingers.:

There are several other very useful Array iterator methods that we'll cover later this week - you can get a peek here when you get a chance.

Partner up and practice using callbacks with iterator methods by doing the following:

We'll review a solution in 15 minutes...

Before we can clearly understand what "asynchronous" means, it will help to confirm what synchronous code is.

So far, all the code we've written is synchronous code.

This is exactly what you would expect - right?

Unlike the synchronous code we saw above, the code following an asynchronous function call continues to run before the async function finishes.

Until we start working using asynchronous functions used to fetch data across the internet or retrieving data from a database, we'll use setTimeout to "simulate" asynchronous code.

Why do Asynchronous Functions exist?

Asynchronous functions are necessary in JavaScript because JS runs on a single CPU thread dedicated to handling events, running your code, painting the screen, etc.

Now imagine calling a function that gets data from a database. From the CPU point of view, the database will take an eternity to return the data.

If the CPU were to wait until the data came back, nothing else could be done and the browser would freeze up!

JavaScript avoids forcing the CPU to wait for "long-running" input/output operations, such as fetching data across the Internet.

A good example of JavaScript's asynchronous programming model is the browser itself when it is fetching images as a page loads. The browser does not load one image at a time - that would be horrifically slow! Instead, it kicks off the requests for the images in parallel (at the same time).

How does the browser know when an image has been retrieved and is ready to be painted? By implementing callbacks and something known as the event loop (in this video, Jake Archibald from Google does an amazing job demonstrating the browser's event loop).

We'll learn about promises later in the course, first let's see how callbacks are used to implement the async programming model.

The getFriends() function below is synchronous. It returns an array of friends immediately when invoked, and everything works just peachy:

Now let's use a setTimeout within getFriends() to simulate a long-running asynchronous function (as if we were fetching the data across a network):

Running the above code will generate an error because the friends variable will not be an array of data before we call forEach on it.

What's a programmer to do?

Callbacks to the Rescue

We're going to make it possible to work with the getFriendsAsync function by refactoring it to accept a callback function as follows:

The getFriendsAsync function has been refactored to accept a callback function, which it invokes at the appropriate time - in this case, when the setTimeout times out.

Note how getFriendsAsync calls the callback passed to it and provides it with the array of friends as an argument - good stuff! This is a common pattern when calling an asynchronous process.

Functions that are asynchronous must be designed to either:

Copy the following three functions into your Repl:

The above functions are working asynchronous functions - DO NOT change any of their code. They are what we call "black boxes" because we do not need to know anything that goes on inside of them.

Each of the three functions, step1, step2 & step3, accept a single argument - a callback function.

Partner up and figure out how to invoke the three functions such that the output in the console will be: